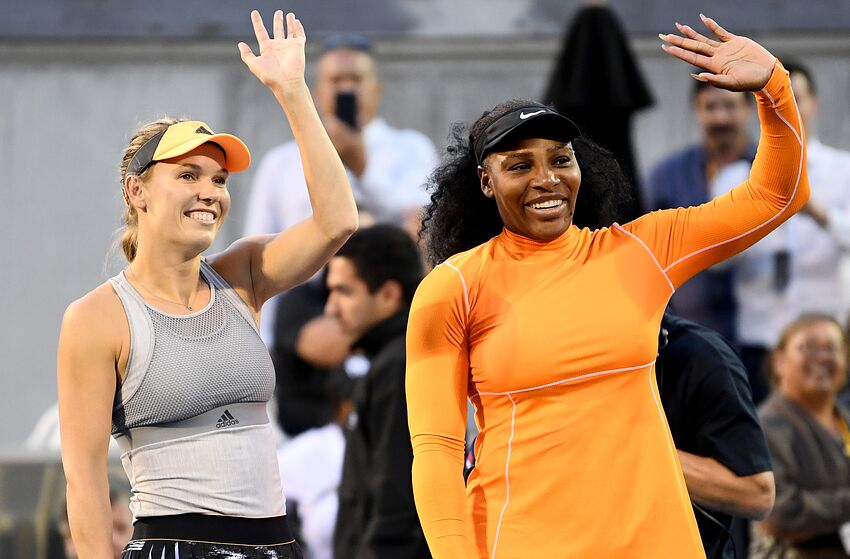 After an impressive doubles win alongside Caroline Wozniacki that she described as “a dream come true”, Serena Williams has a new opponent in the singles.

Serena Williams and Caroline Wozniacki teamed up with impressive effect to win their first doubles match together at the ASB Classic and now the American is preparing to face an unexpected singles opponent.

A dominant 6-2 6-4 win over Japanese duo Nao Hibino and Makoto Ninomiya gave Serena and the retiring Wozniacki a superb start to their week in Auckland.

Serena’s attention now turns to singles, but she will not be facing Russian Svetlana Kuznetsova as initially expected.

Kuznetsova was forced to withdraw from the event just before it began due to a virus, so Italian Camila Giorgi will take her place in the draw.

Serena has played Giorgi on four occasions before and won every time, though their most recent meeting in the quarterfinal of Wimbledon in 2018 was a thriller, going all the way in three close sets.

She will also be preparing for the next round of the doubles after making an excellent start to her partnership with Wozniacki, one which both players were delighted to make happen before the Dane ends her career.

After their win, Serena talked about her close friend Wozniacki, saying: “We were there to win.

“When she said: ‘Come on!’ you could tell in her eyes that she was really there to win. I had a blast. It’s so good to play with her. It’s a dream come true.” And Wozniacki was similarly excited, saying she wished she and Serena had done it sooner.

While Serena is a multiple major winner in doubles, the Dane had not won a WTA Tour doubles match since 2011 and had not played in the format since 2016.

Wozniacki went on to say: “For me at the beginning, I was really just trying to work out where I was supposed to be standing. I just listened for Serena to tell me what to do and I did it.

“She was a great leader and I was just trying to follow her. This is probably the most fun I’ve had.”

While Serena is yet to play her first-round match with Giorgi, the singles competition is under way.

Teenager Coco Gauff moved a step closer to a first meeting with Serena by recording an impressive 6-3 6-1 victory over Viktoria Kuzmova to start 2020 on a high.

A happy Gauff told the WTA Tour: “I felt confident, I feel like I’m moving well. I had a good offseason, and I think that’s showing in my matches.

“It’s definitely the windiest match I’ve played, but I’ve practised in windier. It’s hard to get used to, but in Florida we get windy days like this.”

It was also a good day for Eugenie Bouchard, who won her first full WTA Tour match in 11 months to book a second-round meeting with Caroline Garcia.

Trending: Beyonce was proud of me, says Osaka

Wozniacki will start her singles campaign against New Zealander Paige Hourigan, while rising U.S. star Amanda Anisimova is due to take on Kateryna Kozlova.

At the Brisbane International, there were good wins for Americans Sofia Kenin and Alison Riske, while two significant shocks also took place.

Collins was diagnosed with rheumatoid arthritis last October but said she feels better than she has for more than a year after a 56-minute win which gave fuel to her lofty career ambitions.

Collins, who has hired a team of four full-time coaches and fitness experts to help her through the 2020 season, explained: “I had been feeling symptoms for quite some time and it just took a while for them to make the right diagnosis.

“I’ve been able to receive medical treatment for it that allows me to do what I’m able to do, and this is the best I’ve felt in probably over a year.

“I really want to be number 1 in the world one day and win a Grand Slam at some point in my career. So I’ve invested in myself by having a full team and making sure I have all the resources I can have.”

At the Shenzhen Open, second seed Aryna Sabalenka is safely into the last 16 after a straight sets win over Margarita Gasparyan.

A busy week on the WTA Tour will continue when Ash Barty and Naomi Osaka begin their campaigns in Brisbane, while Serena will hope to avoid an upset against Giorgi in her first singles match since the US Open final four months ago.