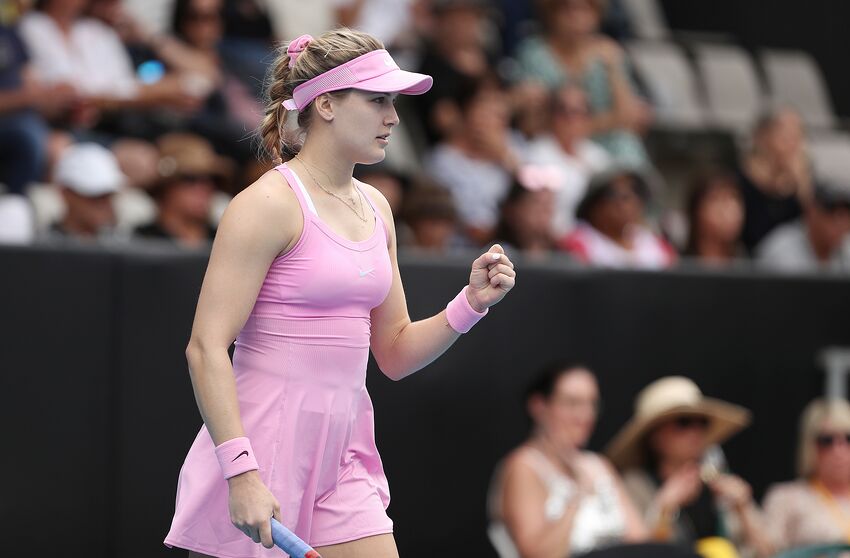 Eugenie Bouchard is into the quarterfinals of the ASB Classic, while Serena Williams and Caroline Wozniacki continue to impress in the doubles.

The revival of Eugenie Bouchard has continued after the Canadian impressively reached the quarterfinals of the ASB Classic with a win over number eight seed Caroline Garcia.

Bouchard followed up her first win on the full WTA Tour in 11 months from round one with another victory in Auckland.

She defeated France’s Garcia 6-4 6-4 in one hour and 28 minutes and will now play rising American star Amanda Anisimova, who beat Daria Kasatkina, in the last eight.

Garcia is looking to use the early weeks of 2020 to bounce back from her poor year on the WTA Tour in 2019.

But her struggles have been nothing compared to those of Bouchard, who had previously declined from her career-high world ranking of 5 achieved in 2014 but then rapidly tumbled out of the top 100 as her problems intensified last year.

The 25-year-old entered this week as the world number 262 and got into the tournament via a wildcard.

But after showing impressive character to recover from falling behind in the opening set of her first match with Kirsten Flipkens, she produced a controlled performance against world number 46 Garcia, a player 216 places ahead of her in the WTA rankings.

Bouchard was not broken in the first set and although she fell 2-0 behind in the second, she immediately broke in Garcia’s next two service games to seize the advantage.

Garcia hinted at a comeback when she forced three break points as Bouchard served for the match at 5-4, but the Canadian saved them all and then converted match point at the first time of asking when her opponent sent a backhand return long.

A battle with French Open semifinalist Anisimova will be an even greater test, with the American having won both her matches in straight sets, impressing in the process.

Whatever happens from here, though, Bouchard will be thrilled with her progress, equalling her run to the last eight in last year’s competition and setting the platform for a return to prominence in 2020.

Serena Williams and Caroline Wozniacki are into the semifinals of the doubles competition at the ASB Classic.

After an impressive first match together, they had both also earned excellent victories in the opening round of the singles.

They returned to doubles action against Caroline Dolehide and Johanna Larsson and although they were playing the top seeds, it only took the star pairing, who are relishing their partnership, 51 minutes to claim an emphatic 6-2 6-1 victory. Unlike Serena, Wozniacki has not played much doubles on the circuit and her previous win had come in 2011, something she joked about on court after the match, per WTA Tour.

Wozniacki said: “I’m happy to have my second win in 10 years in doubles! But I’ve got the best partner.”

Coco Gauff and Caty McNally are also in the semis and would face the dream Serena-Caroline pairing in the final if both teams win their next matches.

Back in the singles, second seed Petra Martic lost in three sets to Alize Cornet.

Serena Williams, Caroline Wozniacki, Coco Gauff and defending champion Julia Goerges are all yet to play their last-16 matches, where they will bid to join Eugenie Bouchard and Amanda Anisimova in the ASB Classic quarterfinals.